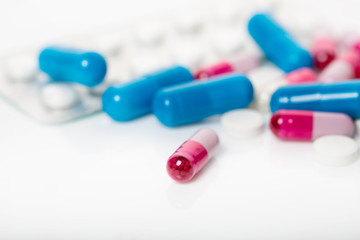 Used and Abused: The Most Common Types of Prescription Drugs that are Abused

Do you wonder why America has been so taken by substance abuse over the years?

If you’ve been affected by addiction, then you know how troubling it is to see the state of substance abuse worsen each year. To the uneducated, it might be the result of alcohol or street drugs like heroin and amphetamines. But, the truth is, the most dangerous drugs are the ones being prescribed to us.

In this post, we’re going to discuss the different types of prescription drugs that get abused in our country. It may or may not surprise you to hear that some of these can lead to serious dependency issues, or worse, death.

It’s going to be a long hard road back, but if we agree to stricter regulations on pharmaceutical companies, we can climb out of this hole we’ve fallen in. The best way to start is by getting everything out in the open. Let’s do that now.

What Types of Prescription Drugs Are Most Abused?

The prescription drug problem in the United States is a complicated issue. When a doctor prescribes you a drug, their intention is not to hook their patient on a substance. It’s to help them. However, it’s the broken system that is seeing more and more people addicted to these legal, but dangerous substances.

The most abused prescription drugs fall under three categories: opioids, central nervous system (CNS) depressants, and stimulants. People are being prescribed these drugs for various issues. Many of these are completely valid, but the problem lies in prolonged prescriptions and teenagers stealing their parents’ medication.

All of this has resulted in an enormous number of deaths. Opioids alone accounted for nearly 50,000 of the 72,000 overdose deaths in America in 2017. Let’s unpack this a little bit.

The opioid crisis is the most publicized substance abuse issue in America, and rightfully so. While some of it can be chalked up to addictive illicit substances, it’s real root is with prescription drugs. For example, the typical practice has been to prescribe the opioid Oxycontin as a pain killer.

This is a very addictive substance that often hooks the patient before their initial prescription is over. When the prescription runs out, these people have to resort to obtaining these drugs in illegal ways. They eventually resort to heroin and fentanyl as cheap replacements.

This is a simple explanation for a complicated issue. But, it illustrates the helplessness that we face at this juncture. Substances that are being prescribed are powerful, so doctors only prescribe a small amount. Patients become addicted nonetheless and seek out cheap/illegal forms of the medication instead.

There are several other opioids that are regularly prescribed to treat pain. Vicodin, Demerol, Darvon, Lomotil, and Morphine are all very common and all have addictive properties.

Media attention is focused more on this epidemic, so brighter days are ahead. Currently, however, far too many people are suffering at the hands of addiction. Big-pharma is making far too much money to want things to change. It’s time to hold those responsible, accountable.

Another one of America’s great epidemics is the battle for mental health awareness. It’s coming to light that more Americans than we ever could have imagined are suffering from anxiety and depression. While the stigma attached to mental health treatment is loosening its grip, drug abuse among patients is on the rise.

Benzodiazepines are a class of pharmaceutical drugs used to treat anxiety, depression, panic attacks, and epileptic seizures. They’re even used to treat the withdrawal symptoms that happen during the detox process from heavier drugs. However, benzos themselves can become quite addictive.

Benzos are legal, but due to their prominence in treating these aforementioned illnesses, they’re widely available to many people. The more you use benzos, the more you’ll want to take. Building up a perceived tolerance to them results in a greater dependency.

While these things are much less physically destructive to the user than opioids, they still present a massive problem. Often, abusers will use other substances in conjunction with the benzos to achieve an even greater high. Most of the hospital visits associated with benzo abuse are the result of a cocktail of substances.

Because of how they’re prescribed, benzo abusers can develop under the care of the prescribing doctor. For that reason, it can be hard to spot when someone is abusing benzos.

Amphetamines are usually associated with street stimulants like meth and ecstasy. Prescription drugs like Adderall and Dexedrine are now part of the conversation, however. These drugs stimulate activity in the brain, leading to greater energy and focus on their users. This can be euphoric, and thus, addictive.

Because of the increase in energy, prescription amphetamines have become very popular with young people dealing with the stresses of high school and post-secondary education. Kids are taking them so that they can study more effectively and do better in school.

There are conflicting reports when it comes to the number of prescription amphetamine users, but the signs are often clear when someone is abusing them. You’ll see increased blood pressure, decreased appetite, mood swings, aggression, paranoia, and an inability to keep up with their responsibilities.

If you’re seeing these symptoms in a child that you know, they may need help kicking their prescription amphetamine habit. This one, unlike opioids, is very beatable and long-term damage can be easily mitigated.

If You Notice a Problem, Seek Help

It can be disruptive to your friendships and family dynamic to confront an individual that you think is abusing one of these types of prescription drugs. It won’t be an easy road to recovery, but it’s far better to deal with it sooner than to let it grow and worsen. Often, these things can lead people down a dark path.

Finding help for your loved one’s addiction is a brave move, but not something that you have to do alone. Visit Recovery In Motion to find affordable treatment near you. We specialize in intensive inpatient and outpatient programs, as well as therapy, intervention, and life skills training.

While you’re on our page, visit our blog to read more informative posts about confronting addiction and how to recognize symptoms of addiction.